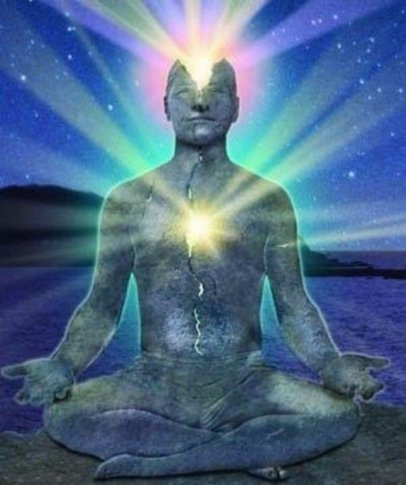 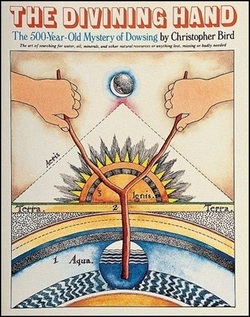 Chris Bird wrote the handbook for dowsing. Marines were taught Military Dowsing for tunnels and more.

"To dowse," says the author of this definitive study of the divining art, "is to search with the aid of a handheld instrument such as a forked stick or a pendular bob on the end of a string - for anything: subterranean water flowing in a narrow underground fissure, a pool of oil or a vein of mineral ore, a buried sewer pipe or electrical cable, an airplane downed in a mountain wilderness, a disabled ship helplessly adrift in a gale, a lost wallet or dog, a missing person, perhaps a buried treasure." Co-author of The Secret Life of Plants, Christopher Bird has filled this book with exciting, documented stories, most of them illustrated with photographs and diagrams. It provides a complete history of the art of dowsing around the world and discusses in detail the various existing theories attempting to explain this extraordinary phenomenon.

The late Christopher Bird took a documentary view of the whole subject of dowsing, from it's earliest history to the present day, in the fields of water divining, mineral and oil exploration, tunnel and cave location, missing objects, animals and people, geopathic stress,  medical diagnosis, and Soviet dowsing protocols, including both physical and remote sensing.

Robert Beutlich, The Ring that Sings; Quarks, Occult Chemistry and Velocity of Energy Beyond the Physical (1978) B14

T. Galen Hieronymus, (D) From the "Black Box" to the Radiation Lab; The Evolving Psychotronic Instrumentation (1978) B9

Paul Sauvin, Detection of Human Interactions Over a Distance (1979) C19

Dr. Charles Whitehouse, Virginia Board of Medicine vs. Whitehouse (1980) D4

Andrija Puharich, The Mechanism of Bio-Information Acquisition by Means of Skin Stroking (1981) E1

Jerry G. Gallimore, Selection and Use of Crystals, Talismans and Healing (1982) F18a

Kathleen Joyce, Radionics and Other Technologies in Agriculture (1982) F13b

Andrija Puharich, Successful Treatment of Mammary Neoplasms in Mice with Gaseous Superoxide Anion and Ozone - A Theoretical Discussion of the Data (1983) G15

Ruth Harvey, ELF Use of the Alpha-Stim: Equipment and Demonstration (1984) H17b

Andrija Puharich, Potential Hazards to Agriculture of the Greenhouse Effect and Its Cure (1984) H1

Marcel Vogel, Analysis of Psychoenergetics of Dowsing and Radionics, and How It Works (w/ J.T. Smith) (1984) H26

Mary Hardy, Theory of Electromagnetic Chemistry and How It Relates to Color Therapy, Homeopathy, and Psychotronics (1985) J21ab

Barbara Hero, International Harmony Based Upon a Music of Planetary Grid (1985) J26a

Frank Meyer, Beyond Space and Time: The Third Sector of the Human Universe (1985) J9a,b

Andrija Puharich, The Final Solution to the ELF Problem (1985) J10a,b

Rozanne Bazinet, The Importance of Proper Training in the Use of Quartz Crystals (1986) K49b

Beverly Coleman, The Song Is You (Live Experiment with Mind Mirror, Music, and Color) (1986) K55a-d

Eugenia Macer-Story, Anti-Gravity Reality: Does the 5th Force in Physics Relate to ESP/PSK and Healing? (1986) K22a

Norman Mixell, The Structure of Water by Power of Mind (1986) K2a,b

Rowena Pattee, Mapping of Leptons and Quarks on the I Ching (1986) H16b

Elizabeth Rauscher, Criterion for Existence of a Phenomena (1986) K21b

David Whitefeather, Tuning in on a Clear Channel (1986) K9a

Bob Gulich, Mind and Matter, A Sacred Geometry - The Principle for Design of Worlds (1987) L3b

Preston Nichols, Ancient to Modern Detectors and How They Interface with Scalar Waves (1987) L14ab

Dan Winter, Shape and Significance of Genetic Material as a Wave Path for Frequency Signature (1987) L2b

Mary Hardy, The Truth About Pyramids - The Secret Antenna System that Energizes Earth (1988) M28a
Mary Hardy, Use of Reagents and Crystals to Enhance Psychotronics Instruments (1988) M30a

Duncan Laurie, Report on the Betar/cotyledon and Applications (1988) M3b

Andrija Puharich, The Search for the Massless Scalar; Experiment and Theory (1988) M5abc

Jeff Smith, Bioenergetics of the American Environment - A Call for Research and Observation on Future (1988) M8ab

James Verdier, Communication for Subawareness Sources for Physical Theories and Some of the Results (1988) M6a

Marcel Vogel, The Structuring of Water by Crystals: Theory and Mechanism of a Formation of Metaphase Systems in Water by Spinning Around a Tuned Crystal (1988) M14ab,c

Cleve Backster, Biocommunications Capability at a Distance Between Human Donors and In Vitro Oral Leukocytes (1989) N15b

David L. Faust, Kirlian Photography: A Look Back and a Look Forward at a Unique Scientific Tool (1989) N18b

Keith A. Fredericks, The Photographic Detection of Tachyons in Human Body Radiation (1989) N16b

Samuel Lentine, The Dynamics of Trauma: Mechanisms of Action (1989) N3b

Peter Moscow, Radionics as a Complementary Management Tool in a Case of Inoperable Low-Grade Astrocytoma Affecting a 30-Year-Old Woman (1989) N10cd

Theodore Rockwell, How Should Science Handle the "Unbelievable"? (1989) N2b

Marcel Vogel, The Modification of Fluidic Materials by Means of Crystal Technology (1989) N8b

Thomas E. Bearden, Action at a Distance: The Fundamental Mechanism of Radionics (1990) P14ab

Hugh Lovel, Agriculture from a Holistic Point of View (1990) P16a

Justin O'Brian, Mind Your Matter: Toward a Psychotronic Vision for the Future (1990) P17ab

Andrija Puharich, Unification of the Four Forces of Nature with the Mind: Theory and Experiment (1990) P19abc

Vince Wiberg, Geopathic Zone Detection and Prevention: How to Avoid the Ills of the Present-day Environment (1990) P18ab

Alfred Bielek, From Philadelphia to Phoenix: The Psychotronic Connection (1991) Q6a

Dennis Stillings, Catching Up with the Past: The Future of Electromedicine (1991) Q1a

Dan Winter, Is Attention Itself a Fractal? (Set of two Audio Tapes (1991) Q9abc

Peter A. Crist, Orgone Biophysics; An Introduction to Orgonomy (1992) R4a

Barbara Hero, A Rosetta Stone for Everyone: The Theory of Relationships (1992) R6a

Glen Rein, Consciousness and Its Transformation with Subtle Energy (1992) R7b

Mark Benza, Introduction to the Future of Molecular Electronics and Nanotechnology (1993) S7a

Laura Faith, Observations of Parapsychology and Psychotronic Research in the Former U.S.S.R. (1993) S3b

Alejandro Silva Garland, Preliminary Studies for the Development of the "Psychic Monitor" and the Resister of the Subconscious Temporal Displacement Effect (1993 IAPR) T5b

V. Gorodskaya, Biotone-Center of Health as an Example of the Organization of Biotherapy in Russia, (1993 IAPR) T11b

T. Gulnara, Biotherapy from the Point of View of Official Medicine (1993 IAPR) T12a

Steven Halpern, The Role of Music in Transformation (1993) S6ab

Dalibor Karasek, A Comparison of the Bio-locative Method of the Origin of Anomalous Geodynamic Processes in Bituminous Coal Mines with Results of Geophysical Measuring "On Site", (1993 IAPR) T10b

I. A. Khan, Biotherapy in the Traditions of Kazakhstan and Mongolia, Past and Present (1993 IAPR) T12b

I. K. Khantseverov, Psychotronics in the System of Sciences (1993 IAPR) T5a

Glen Rein, Healing Energy & DNA; A Novel Mechanism for the Spiritual Transformation of the Body (1993) S8b

Andrej Sàndor, The Influence of Geoactive Areas on the Work Activity of Man; Shielding and Elimination of Negative Effects in the Environment, (1993) S18ab
Andrej Sàndor, Screening of the Geoactive Zones (1993 IAPR) T8b

J. Schrotter, The Effect of Geopathic Zones on the Safety of Rail Transport, (1993 IAPR) T11a

Dawn S. Dorazio, A Theory and Device for Vibrationally Repatterning Ourselves (1994) U2b

Mary Hardy, Tachyon Energy: The Wisdom of Healing the Body With the Mind (1994) U11b

Patricia Hendricks, The Role of Healthy and Harmful Fats in Our Spiritual Development" (1994) U11a

Sarah Hieronymus, Uses of Radionics to Analyze, and the Application of, Spiritual Energies, (1994) U12a

Henry Monteith, From Genesis to Revelations: New Interpretations Based on Recent Archeology (1994) U4abc
Henry Monteith, The Monopole Theory of Gravity and Anti-Gravity, (1994) U9a

Chris Morci, Charting the Gods and the Semi-Divine (1994) U5a

Glen Rein, DNA as a Detector of Electromagnetic and Non-Hertzian Energy, (1994) U7b

Edward Rosenbluh, Learning to Influence and Develop the Chemical Structure of the Body and Brain to Increase Development of a Positive Reality, (1994) U14ab, c (2 Audio tapes)

Thomas Valone, The Secret Technologies of Andrija Puharich (1995) V 2a

1986 How to Build Your Own Device: Schematics, Materials, K30ab

1989 Making It Real through the Media, Beverly Coleman, N23ab

1992 Electromagnetic Pollution No.1: The Problem, Detection, and Solution, Andrew Michrowski, R16 thru R20

1994 Tapping the Secrets of the Soul: From the Ancient Kahunas to Beyond the Quantum, Diana Vivanti, U21abc