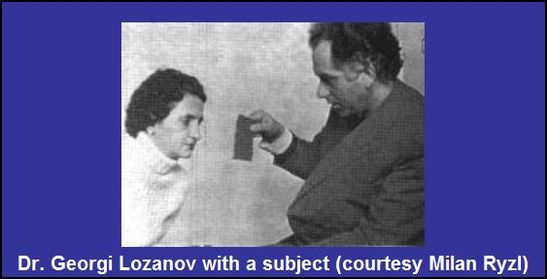 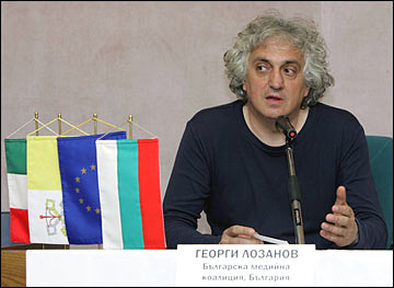 Dr. Georgi Lozanov with a subject (courtesy Milan Ryzl)The telepathic receiver sits in front of two telegraph keys, one for each hand. Some distance away, the sender telepathically suggests that the receiver press either the right or left key, according to the beats of a metronome. Each telepathic suggestion is repeated ten times. The receiver must get six of these correct for the message to be considered received. Lozanov reported at the 1966 Parapsychology Conference in Moscow that phrases and entire sentences have been sent this way with about 70% accuracy. Thousands of such tests are said to have now been demonstrated before many scientists. As the name of his institute implies, Lozanov is concerned with many of the psychological factors effecting ESP scores. Using techniques derived from yoga, Lozanov combines suggestion and relaxation in a way that is different from hypnosis in that his subjects remain in the waking state. Used in education, these techniques show phenomenal promise to increase language learning, memory, artistic and musical ability. Lozanov also is applying his techniques towards the development of mental healing and dermal vision. One of Lozanov's many research activities involves the evaluation of the predictions made by the blind, peasant woman, Vanga Dimitrova, who may be the modern world's first Government supported prophetess. (In fact, the Institute of Suggestology and Parapsychology, with over thirty staff members, is supported by the Bulgarian government.) Studies are reported to have shown that Dimitrova's predictive abilities -- particularly strong in terms of finding lost relatives and friends--are about eighty percent accurate.56


In this article we define the term Accelerated Learning.

Accelerated Learning (AL) is a theory of learning built on the pioneering work of Bulgarian psychotherapist Georgi Lozanov.

Lozanov postulated that all adults have core thinking reserves deep within their brains and that those reserves can be harnessed to enhance learning once learning becomes a pleasurable experience. Drawing on the two words “suggestion” and “pedagogy,” he called his theory Suggestopedia.

Lozanov believed that learning should happen in an environment designed to bring forth positive emotions that celebrated learning and create a feeling of possibilities within the learner.

A key tenet of Suggestopedia is the role of the instructor as facilitator of learning rather than lecturer, that the teacher must be fully congruent with the subject being taught and absolutely positive in the learners’ abilities to learn the material.

A third tenet is the need for learners to be actively engaged in their learning through participation, games, and sharing. In AL, learning becomes participant driven, with learners cooperating with, and supporting, each other.

A fourth tenet is the use of the arts – music, acting, drawing, posters, mnemonics – to reach past the logical components of the human brain into the deeper, emotive core.

Over the years, AL has become a catchall phrase for techniques that support suggestopedic goals. In future article, we will explore those methodologies in greater detail.

What's New with My Subject?
Dr. Georgi Lozanov created a remarkably effective method of teaching based on how the brain actually learns.A native of Sofia, Bulgaria, and a medical doctor specialized in psychiatry and psychotherapy, Dr. Lozanov has a passion for understanding how human beings learn. This led him to travel around the world to examine examples of super memory and learning achievements.

In 1966, he established the Suggestology Research Institute in Sofia to put his new system of teaching into practice.

Dr. Lozanov and his colleague, Dr. Evelyna Gateva, first applied the new methodology to the teaching of foreign languages, with astounding results. Students learned much faster than they had under traditional teaching methods, they retained the learning much longer, and they had a LOT more fun in class!

Suggestopedia: A New Way to LearnDr. Lozanov called his new methodology Suggestopedia. He developed the term by combining two words: suggestion and pedagogy. Dr. Lozanov chose this name because of his fundamental concern about the influence of suggestion in teaching. In doing so, he asked himself questions like:

Suggestopedia made learning a pleasurable, natural process by:

The Reserve Capacities of the MindDr. Lozanov’s main concern was the mental, physical and spiritual health of the learner. His system not only allowed students to learn without trauma and stress, but it also helped them rediscover their natural thirst for learning.

In the process, learners uncovered previously hidden capacities and talents, which Lozanov called the reserve capacities of the mind.

The result was that students not only had fun learning, but that they also absorbed subject matter at greatly increased rates. In fact, the results were phenomenal. Students learned material 3 to 5 times faster than with “normal” teaching methods.

As a result, the movement in the United States became known as either Accelerative or Accelerated Learning.

The organization experienced great success as it began teaching educators how to apply suggestion, relaxation and music to the learning process. It also readily absorbed new knowledge from cognitive scientists and pioneering educators.

The Principles ExpandAs Dr. Lozanov was developing his methodology in Bulgaria, cognitive scientists and pioneering educators in America were also making great strides in understanding how the brain learns.

As a result, the Accelerated Learning movement in the United States embraced these new learnings and incorporated them into their best practices in teaching, training and development.

In 1994 SALT changed its name to the International Alliance for Learning in order to fully express the foundations of this expansion.

Dr. Georgi Lozanov Today Dr. Lozanov has continued to develop his methodology and train teachers. Currently, he divides his time between Sofia, Bulgaria, and Vienna, Austria, where he directs the International Centre for Desuggestology.