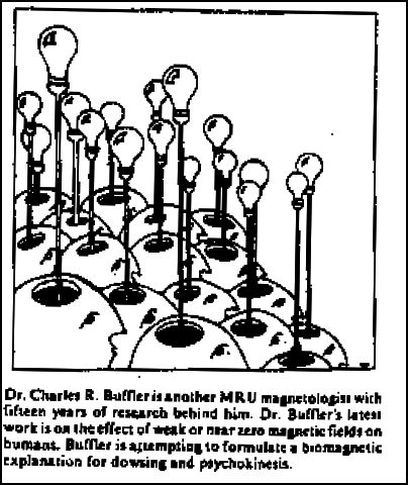 Dr. Charles Buffler, President of the International Microwave Power Institute and Vice President of the Microwave Research Center. He is a well-known expert in the application of microwave technology. During his thirty-five years of industry experience, he has led the development of many important electromagnetic field device and systems concepts for microwave ovens, industrial microwave systems, communications, and radar. Dr. Buffler is a graduate of the University of Texas with a BS. in Physics-Electronics,and of Harvard University with an MS. and Ph.D. in Engineering and Applied Physics.

Dr. Charles R. Buffler, a research physicist, received his B.S. (1951) from the University of Texas and his M.S. (1956) and Ph.D. (1959) from Harvard University. After conducting experiments in spin wave analysis of ferromagnetic resonance, he went on to study the effects of weak or near-zero magnetic fields on humans and the theoretical aspects of microwave interaction with various materials. He has also experimented on a possible biomagnetic explanation for dowsing and investigated ESP phenomena. Some of this work was in collaboration with Professor Yves Rocard, Director of the Laboratory of Physics at the Ecole Normale Superieure, University of Paris. A Senior Member of the IEEE, Dr. Buffler has published articles in the Journal of Applied Physics, the American Journal of Physics, and elsewhere.

Dr. Buffler has over fifteen years' experience as a scientific researcher, primarily in the fields of magnetism and parapsychology. During and after a research assignment at Harvard, he conducted several experiments, which resulted in his "Spin Wave Analysis of Ferromagnetic Resonance" and other papers disseminated in the Journal of Applied Physics, the American Journal of Physics and various other scientific publications. Dr. Buffler's latest work is on the effects of weak or near zero magnetic fields on humans and on the theoretical aspects of microwave interactions with various materials.

Dr. Buffler has a long-standing interest in the field of parapsychology. He has assisted in and performed independent experiments on a possible biomagnetic explanation for dow-sing, and has investigated phenomena of general extrasensory perception and psychokinesis. Some of these experiments were conducted in Paris with the eminent ESP researcher, Professor Yves Rocard, Director of the Physics and Chemistry Laboratories of the Ecole Normale Superioure, University of Paris.

Dr. Buffler received his B.S. in Physics (1951) from the University of Texas, and his M.S. (1956) and Ph.D (1959) -from Harvard. He is a Senior Member of the Institute of Electrical and Electronics Engineers and a participating member of the IEEE Groups on "Microwave Theory and Techniques", "Magnetics", "Engineering in Medicine and Biology" and "System Science and Cybernetics". He is also a member of the American Society of Dowsers, Phi Beta Kappa, the Honorary physics society Sigma Pi Sigma and Sigma XI.